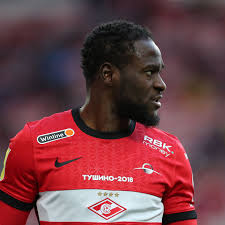 The London club officially announced the departure of the winger after his loan move to the Russia club Spartak Moscow was made permanent.

The Russian side announced his permanent deal on Friday after he has a successful loan spell with the club last season.

In Message, Moses thanked the London based club for the love showed to him throughout his stay with the club and for assisting him in achieving his target.

“After nine fantastic years and 128 games for Chelsea, I have now officially left the club to join Spartak Moscow on a permanent transfer,” Moses wrote on his Instagram page.

“I’ve loved every moment playing for Chelsea and leave with memories that I will cherish forever, including winning the Premier League, FA Cup and Europa League.

“I’ve always appreciated the love and support shown to me during my time at Stamford Bridge and would like to take this opportunity to thank everybody connected with the club, with a special mention to the incredible Chelsea fans who have always been brilliant with me.

“I would like to wish the club every success in the future. Thank you for everything. I’ll always have blue in my heart,” he said.

Moses who retired from international football after 2018 World Cup in Russia joined the Stamford bridge club in 2012 from Wigan Athletic .