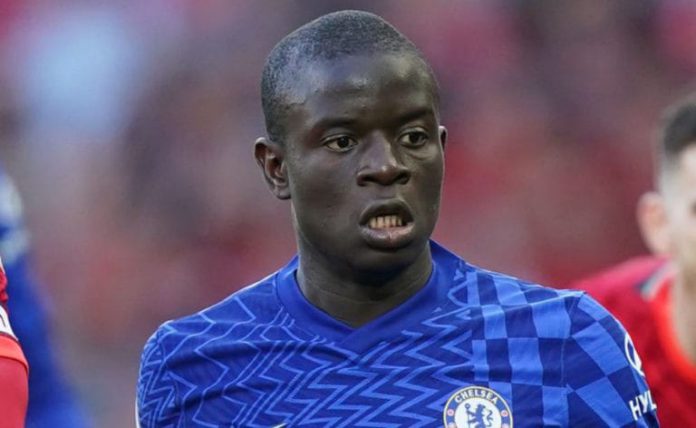 N’Golo Kante has reportedly enticed Arsenal and Tottenham, as the star midfielder could leave Chelsea as a free agent.

According to Spanish outlet Fichajes, Chelsea midfielder N’Golo Kante could depart Stamford Bridge on a free transfer. Arsenal and Tottenham are keen on signing him.

N’Golo Kante’s time at Stamford Bridge could end as the French midfielder could leave Chelsea as a free agent next summer. The Frenchman is in the last year of his contract, and there has been an impasse over discussions to extend his stay.

Kante been a global figure, and Chelsea have played no small part in his rise. Signed from Leicester City on the back of the Foxes’ title-winning campaign, the Frenchman has won every major honour at Stamford Bridge.

He started by reclaiming the Premier League title under Antonio Conte while also winning the UEFA Champions League and Club World Cup, among other honours.
With his contract expiring, Chelsea are reluctant to offer him a long-term deal. Instead, the Blues are open to extending Kante’s deal by a further two years, per the reports, which is something Kante is not very keen on.

Having seen Kalidou Koulibaly and Pierre-Emerick Aubameyang being signed on decent deals, the Frenchman wants parity.
Chelsea are more concerned about his immediate fitness levels, with Kante suffering recurring injuries in the last few years.

If they cannot reach an agreement, the midfielder might depart, with many clubs keen on signing the World Cup winner if he becomes available.

Two of the main clubs keeping tabs on his situation are Arsenal and Tottenham. The duo could battle it out for his signature, considering Kante wants to stay in London. He is comfortable in the city and remains open to prolonging his Premier League career.

The 31-year-old Chelsea midfielder is currently out with an injury, meaning he has not been able to exert his influence on Chelsea, who have struggled in midfield.

However, a switch to Arsenal or Tottenham cannot be ruled out, as they might be exciting options for the Frenchman.
Tottenham have been keen on building a strong squad capable of challenging for honours.

They are not there yet, but a few key additions, such as Kante, could help them in a big way. Fabio Paratici could look into offering a decent contract to the Chelsea midfielder. And if he joins Spurs, they could be serious contenders next term.

Tottenham have intense competition coming their way from Arsenal, who want to sign a new defensive midfielder. Considering Kante’s age, it may be against the Gunners’ recent transfer policy of signing young players. However, his reputation will precede everything else, and he could prove a key cog for Mikel Arteta.

Arsenal are running on thin ice with the fitness of Thomas Partey, for whom they do not have sufficient cover. But the addition of Kante would help them bridge the gap significantly, with Arteta keen on building a strong squad.

Corrie Pretorius sentenced to prison for assaulting teen over salt

Inter Milan defender Bastoni: Lukaku will get stronger and stronger