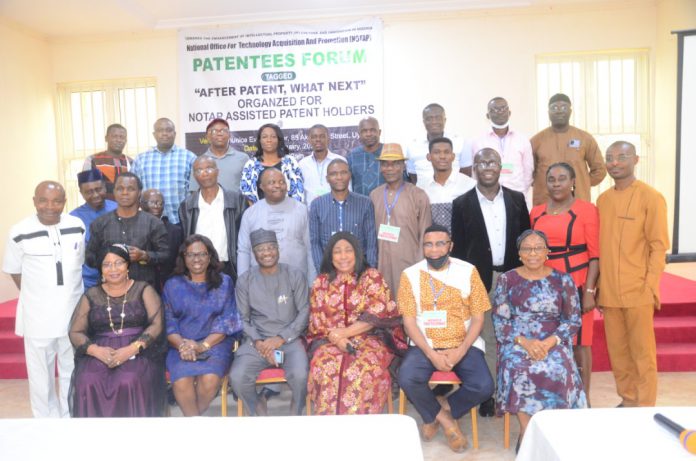 The National Office for Technology Acquisition and Promotion (NOTAP) has urged Nigerian researchers to concentrate more on research that has the potential and capacity to translate into commercializable  goods and services for the economic sustainability of the country.

Speaking at a one day Patentees Forum with the theme “After Patent what next” organized by NOTAP in Uyo, Akwa-Ibom State recently, the Director-General of NOTAP, Dr DanAzumi Mohammed Ibrahim said that there was a weak Intellectual Property (IP) Culture in the country occasioned by poor knowledge of its importance to the economy of the nation.

A statement signed by Raymond Onyenezi Ogbu, Public Relations and Protocol Unit of the agency noted that the DG decried the quality of Research and Development (R&D) results coming from the Nigerian knowledge institutions which according to him was largely caused by poor funding as well as misplacement of priority.

He added that it was expensive to undertake critical research that will metamorphous into tangible products and services, hence the need to increase research funding.

He said that the Office was established to regulate the inflow of foreign technologies into the Country through the registration of technology transfer agreements and at the same time, encourage the development of indigenous technologies.

The DG further stated that in carrying out the responsibilities of the Office, it noticed that over 90% of the technologies that power the Nigerian economy were foreign and for a country that aspires to be economically self-sustainable, the situation was unacceptable.

He said that technologies were products of research and research were undertaken by the knowledge institutions therefore, Nigerian Universities and Polytechnics needed an orientation towards problem-solving research.

The Director-General said that the reason for the initiative was to tailor the minds of Nigerian researchers towards problem-solving research instead of engaging in convention research for the purposes of career progression.

He encouraged researchers to patent their R&D results before publishing for according to him, any research work that is published before patenting is already in the public domain and can be exploited by anybody.

He reiterated that patenting of inventions and innovations was a major step towards commercialization of research results, adding that it was important for researchers to ensure they commercialize their inventions or license them to venture capitalists for according to him, patents are liabilities to the owners when they are not commercialized.

The DG, however, encouraged the participants to write bankable research proposals to donor agencies to ensure that they engage in research that will translate into goods and services as government funding was inadequate.