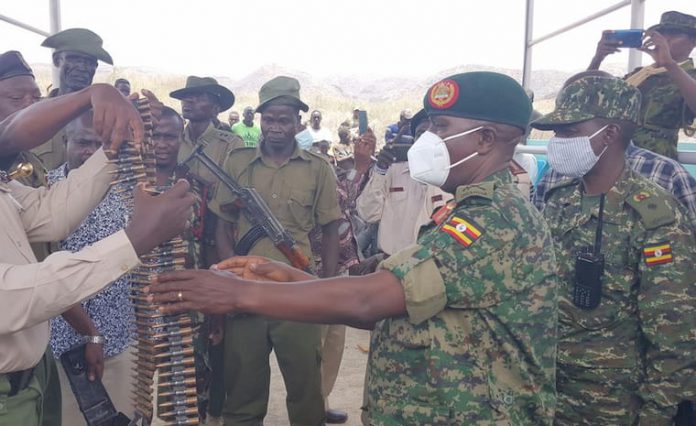 Kenya has apologized for the murder of three Ugandan geologists in Moroto by the Turkana pastoralists.

Lokiriama deputy county commissioner, Yacob Tirop delivered the apology on Wednesday while handing over two guns that the warriors took after killing the geologists and their two Uganda People’s Defence Forces (UPDF) guards.

It was gathered that the geologists had gone to pick soil samples in Lokisilei village in Lotisan sub-county in Moroto district last month.

According to Tirop, Kenya is “saddened” by the act of Turkana people who are enjoying free resources in Uganda. He appealed to the Ugandan delegation led by Brig Joseph Balikudembe, the 3rd Division commander to forgive the Turkana and allow them to return and graze their animals in Karamoja.

URN has since learnt that after the attack, the joint security force comprising of Uganda police and the army flashed Turkana pastoralists from Kobebe grazing area back to Kenya. John Munyes, the Kenyan Mineral minister, said Uganda and Kenya enjoy a cordial relationship, adding that they will not allow a few people to spoil the relationship between the two countries.

“If it was not for Uganda, Turkana cows would have got finished and that’s why we’re pleading with Uganda to please allow the Turkana to return and graze their livestock in Karamoja,” he said.

However, Brig Balikudembe said they will not allow the Turkana to return, until Kenya hands over the killers to Uganda for prosecution.

“We can’t answer your request right now for the Turkana to come back to Uganda because first of all, you have only handed over to us the guns that the Turkana took from our soldiers after killing them. You have not handed us the guns that they used for killing our soldiers and suspects. Even one of our guns had 120 ammunition but you have handed us an empty magazine where are the bullets?” Balikudembe asked.

In his response, Tirop assured the Ugandan delegations that they will look for the suspects and hand them over to Uganda for prosecution.

Liverpool ‘are considering offering Firmino or Keita in swap deal for...