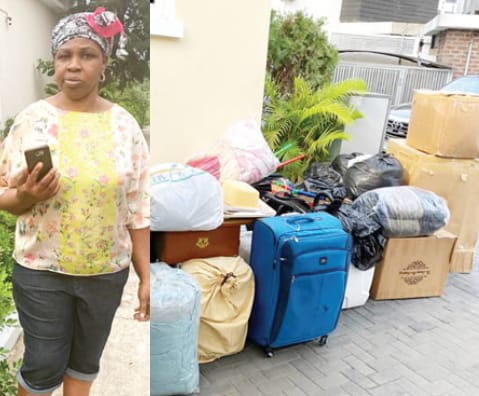 Agnes Ikpea, 64, who has six adult children with her estranged husband, Chief Leemon Ikpea, was thrown out of their home in Banana Island, Lagos.

Her estranged husband, Chief Ikpea had filed a petition at the Edo State High Court in Benin in which he sought the dissolution of his marriage of 39 years to Agnes. Along with the petition, Chief Ikpea also filed an ex-parte application asking the court to order his wife to vacate the matrimonial home in Banana Island.

Justice Acha had refused Mrs Ikpea’s application to transfer the case to Lagos on the premise that both parties reside in the state.

The judge, however, directed the petitioner to provide suitable accommodation for his wife around the Island.

The judge ruled: “It is hereby ordered that petitioner should provide a suitable apartment by way of accommodation within Victoria Island, Lekki axis or anywhere convenient within Lagos outside Banana Island, Ikoyi, Lagos forthwith.”

Following the ruling, Mrs. Ikpea’s lawyers filed an appeal, which they served to Chief Ikpea and his lawyers in Benin.

Agnes’ counsel, while faulting the order of the high court said: “Ordering the respondent to vacate her matrimonial home during the pendency of divorce proceedings has the effect of determining the divorce case prematurely.”

They also applied for a stay of execution of the order and an injunction restraining Chief Ikpea from carrying out the order pending the hearing of her appeal.

However, Mrs Ikpea alleged that her husband disregarded the appeal and the motion for stay of execution and went ahead to throw her out. She said that with the help of some hefty men, her husband threw her out bare-footed without providing her with any suitable alternative accommodation as ordered by the court.

The mother-of-six has asked the Court of Appeal in Benin City to void an order which her estranged husband relied on to evict her from her matrimonial home.