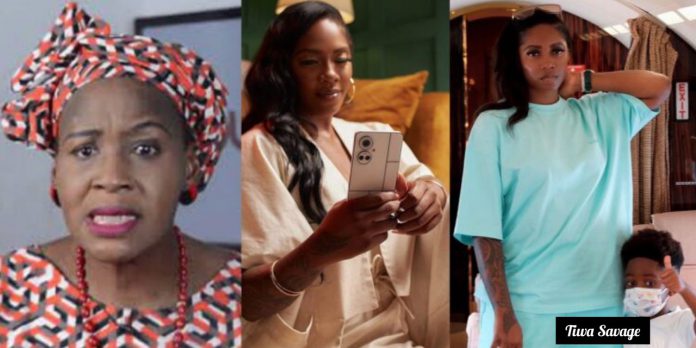 Tiwa in a recently released song with sensational singer Asake, titled “Loaded”, briefly mentioned the leaked tape scandal she was involved in a while ago.

It would be Recalled that in October 2021, the bedroom tape of the singer with an unidentified man leaked online,

In the new song with YBNL signee, Asake, Tiwa Savage spoke about the incident and how many thought the scandal would destroy her.

“Awon blogger, blogger t’on fe mi gba star-(The blogger, blogger that wants to use me to shine) Sex tape o’le baye mi je,- (sextape cannot be the end of me) igbadun kekere yen- (that small enjoyment) Na who never fuck before, hands in the air”, she said in part.

While reacting to Tiwas’s verse on “Loaded,” journalist Kemi Olunloyo lampooned Tiwa for singing about the scandal and reminded her that she has a son.

Portable reacts to his alleged killing of a commercial motorcyclist