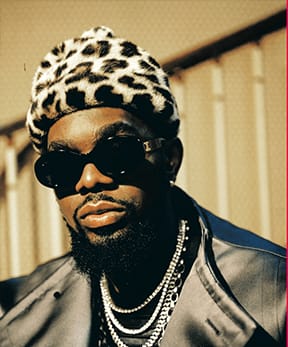 Another Nigerian music sensation, Patoranking will take the centre stage here in Doha as the Qatar 2022 enters the ninth day

He is the second Nigerian to perform after last week’s show by Kizz Daniel. The performance will be at the FIFA Fan Festival at Doha’s Al Park.

The FIFA Fan Festival is a recently intoduced reimagined fan destination and on-site entertainment experience for fans at  World Cup.

According to FIFA, this multidimensional, inclusive event will provide new ways for fans to celebrate their shared passion for football while experiencing the very best in music, entertainment, local culture, food, games and lifestyle in a true festival environment. .

He started his music career doing underground collaborations and signed a record deal with K-Solo’s Igberaga Records in 2010, releasing “Up in D Club” under the outfit.

Patoranking became a protégé of Dem Mama Records after collaborating with Timaya on his song “Alubarika”.

In February 2014, he signed a record deal with Foston Musik and released “Girlie O”, a single that put him in the limelight.

On 9 February 2015, Patoranking announced on Instagram that he signed a distribution deal with VP Records.

On 28 September 2020, Patoranking released a song titled Abule which he released ahead of his album scheduled to be released later in 2020.

He said in 2020 that he got inspiration for the song while playing football.

RAF CEO, board ordered to pay costs from own pockets in...

Toke Makinwa hits those who degrade her achievements